Neemuch being an important region of Madhya Pradesh is known for its unique geographical festures and climate. The most unique geographical feature of Neemuch is its soil and pleasant climate. Both play immensely important role in sustaining and aiding the growth of agricultural sector – the lifeline of entire Neemuch district. Neemuch has unique geographical features that has ever influenced the climate of the region.The total geographic area of Neemuch district is 40 km2 (20 sq mi). It is located between the parallels of latitude 24.45°N 74.87°E. Neemuch shares its border with Rajasthan in the west and north and by Mandsaur district in east and south. As for land utilization is concerned, bulk of the land in the district is utilized by agriculture and rest is either utilized by forest area and non agricultural activities.

As has been mentioned in introduction itself, Neemuch’s climate is pretty unique. In a sense that climatic conditions during all seasons is pretty moderate and not extreme. Cold during winter season is mildly cold, humidity during summer is moderately hot and rains are evenly distributed throughout monsoon season. 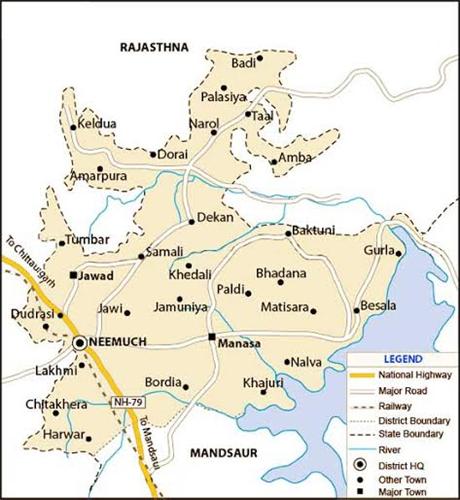 Overall, annuals seasons of Neemuch are divided into:

There are mainly four types of soil found in Neemuch district. These are Medium Deep Black cotton soil, Red loamy soil, Laterite soil and Alluvial soil. Though most of the district is mostly and mainly covered by Medium Deep Black cotton soil. All the soils found in Neemuch District are known for making the land immensely fertile and invariably helping in the growth of agricultural sector. It is indeed a vital geographical ingredient of Neemuch district. Neemuch also has pretty healthy reservoir of minerals. Lime Stone is found in abundance in the area. Stone querying is also done in most parts of the region.


Rivers and Dams in Neemuch

Narmada and Gambhir rivers passes through this district. This sacred river is considered as lifeline of Madhya Pradesh . Narmada River fulfills the demands for drinking water and irrigation. As for Gambhir River is concerned, it is actually tributary of Shipra River, which originates from Ujjan District. Morwan Dam is the only dam located in entire Neemuch district. Since it is the only dam in Neemuch district, it is solely responsible for providing drinking water and water for irrigation purposes to most part of the district. This dam is located just 24 kms away from the main city of Neemuch. It is also pertinent to inform that owing to scenic and lush greenery surrounding this dam, it has become into a fine tourist attraction of the district.

Geographically, Neemuch is quite a rich place. It is home to rivers, dams, flora and huge reservoirs of soils and minerals. Besides, overall climate of Neemuch is also moderately pleasant. Neemuch rich geography has defiantly given it a much needed edge and advantage in agriculture and other important fields of economy.